In my Mother’s garden, when I was growing up, there was a statue of a woman. Her eyes were closed and she was standing in a long flowing robe. She was made of white stone and her hands were peaceful and prayerful. I remember the white roses, climbing around her.

I learned that her name in Chinese is Kwan Yin and in Sanskrit she is called Avalokitesvara, one who “perceives the lamentations of the world.” In Buddhism, she is considered a bodhisattva – an enlightened being. She is the Goddess of Mercy.

I loved this statue. But in life’s flow, possessions get left behind. When my Dad decided to move to Tennessee, Kwan Yin stayed in Maryland, in my Mother’s (now overgrown) garden. But she was not forgotten.

Our neighbor and friend, Judith, kept watch over Kwan Yin – or Mrs. Buddha, as she calls her. One day, Judith asked the new homeowner if she could take Kwan Yin, as a memory of my Mother, Jacqueline. The owner agreed. So Kwan Yin had a new home, in Judith’s garden. When Judith and her husband Norman decided to move to Albuquerque, New Mexico, the Goddess of Mercy went with them. 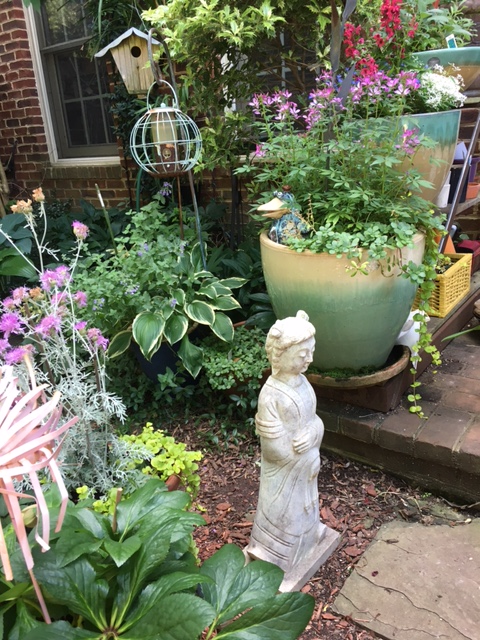 On June 1, Judith wrote to me; it was one my Mother’s birthday. She said:

“Attached is a photo of Mrs. Buddha in her new home in the arid Southwest mountains. It wasn’t until we got her out into some pristine light under our daily turquoise skies that I realized the true beauty in her stone. Your mother would have loved Santa Fe, as this city embraces so many of the humanitarian things she valued.” 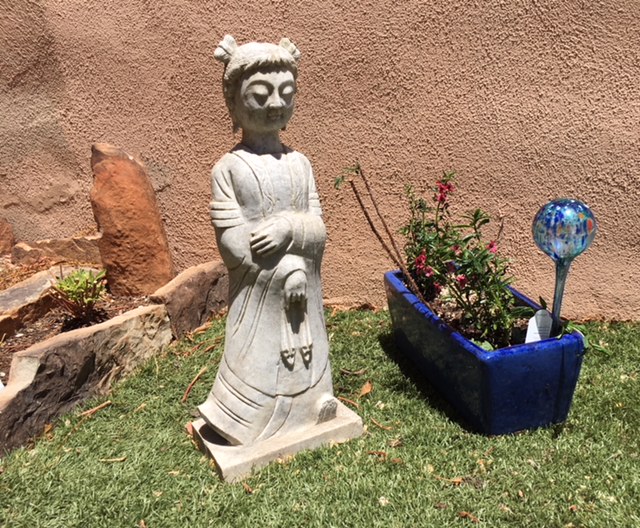 She was also a woman, like any other. She dwelt in constant prayer with her Lord and she experienced the world with an intensity like no other. For her, the trees were not only trees. They were painters of light and shadow. The leaves were great musicians, just like Baha’u’llah said, when he entered the Garden of Ridvan:

“Every tree uttered a word, and every leaf sang a melody. The trees proclaimed: ‘Behold the evidences of God’s Mercy’ and the twin streams recited in the eloquent tongue the sacred verse ‘From us all things were made alive.’ Glorified be God! Mysteries were voiced by them, which provoked wonderment…God’s power and the perfection of His handiwork could enjoyably be seen in the blossoms, the fruits, the trees, the leaves, and the streams.”

This is exactly what Kwan Yin felt and heard and saw when she walked through the fields and the forests. But this was not all. She also heard the cry of every hungry child. She felt the pangs of their pain stabbing her. She saw the mothers walking miles for water, with their aching feet and their beautiful swaying hips. She saw the men lathered with sweat, scything wheat and picking rice.

She saw into the future: the students and teachers dying of gun violence in our schools. The children and families fleeing from poverty and conflict, separated at our borders and denied refuge. She saw artists and musicians singing and loving and pouring out their soul and their sight. She saw the rape and hunger strike of our women and our truth-speakers, and she heard their powerful lament.

Obviously, this kept her up very late at night. With all those cries echoing in her head, how could she possibly sleep? And when she did, her dreams were filled with the faces of all the people she loved – which was everyone.

This continued a long time, until Kwan Yin was an old woman with silver hair and deep, black eyes.

She reached the point of death, and there she saw peace and beauty and healing for all the world’s ills. And at that point – that threshold-point between life and death, she paused.

And she vowed: I will not step over into Enlightenment until all Created Beings are set free.

And to this day, that is where She stands. In the midmost heart of Creation.

She stands at the threshold of Enlightenment, and She holds the door open so that each of us, every blessed one of us, can cry out to her, and She will hear us, and She will respond.