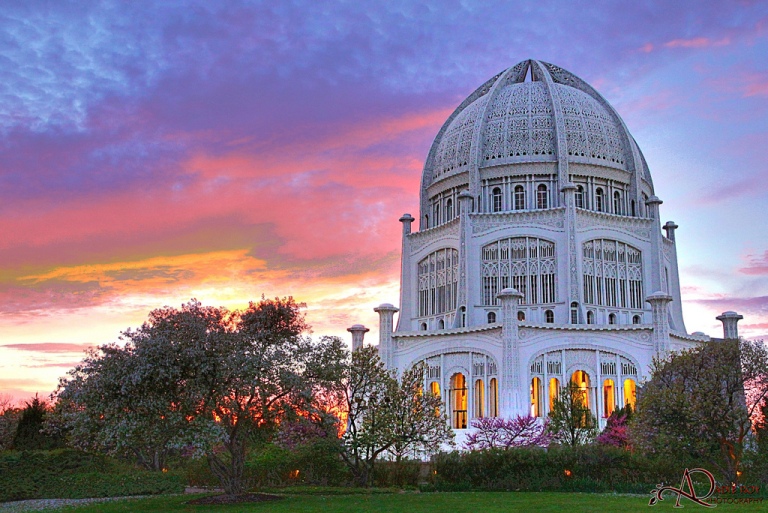 When at night we look into the sky we see only the stars but could we see the orbits of the stars how wonderful it would be… Ovals, circles, and vesicas of endless variety twisted and woven into some great cosmic fabric. This is the theme of the dome, the courses of the stars woven into a fabric.

My father taught me to love the universe. He taught me to gasp in amazement at the connections between our stardust bodies and our light-filled souls. We would go for long drives in the countryside, and talk and talk and talk. We talked about black holes and uncertainty and what it means to be human, to be alive and awake at this particular time in eternity.

With my father’s support and encouragement, two years ago I moved to Washington DC. He helped me find a tiny apartment, and every day I walked to work, up and down 16th Street. Daily, I passed through Meridian Hill Park, a stretch of shade trees and cool fountains in the midst of midtown craziness.

For over 18 months, I walked up and down Meridian Hill. I passed by the statue of Joan of Arc, offering prayers for the souls of liberatrices everywhere. I watched families picnic there in summer. I even joined the periphery of a drum circle, where children, youth and elders all danced together.

Then, a call came and life sent me to Wilmette, to serve at the Baha’i House of Worship. Several weeks after I land, settling into my new home after weeks on the road, I pull out my Dad’s copy of The Dawning Place, a book documenting the building of the Temple. For the first time, I learn about John Earley, craftsman extraordinaire.

I learn that before he designed the ornamentation of the Baha’i House of Worship, he was commissioned to invent and install the special concrete for – you guessed it – Meridian Hill Park.

I slam the book shut as if electrocuted. How could this be? How could my feet touch the DC handiwork of John Earley hundreds of times – completely unaware of this remarkable connection? And now – to be living a mere 7 minutes’ walk from the Temple he also adorned!

I don’t know. All I know is, I am here now. I have circled back to my father’s home, to the city where he was born and became a Baha’i. I feel the magnitude of our spherical lives enter me.

When you sit beneath the Temple’s dome, you see the courses of the stars and all created things, entwining endlessly. You feel these infinite orbits as a pulse. Their rhythm is our pulse.

For men…a soul was given formed from those everlasting fires, which you mortals call constellations and stars, that, round and spherical in form, alive with divine intelligences, complete their orbits and circles with marvelous swiftness… – Cicero

Souls have appeared in the world who were pure and undefiled, who have directed their attention toward God, seeking the reward of God, attaining nearness to the threshold of God, acceptable in the good pleasure of God. They have been the lights of guidance and stars of the Supreme Concourse. Consider these souls, shining like stars in the horizon of sanctity forevermore. – Abdu’l-Baha, The Promulgation of Universal Peace, p. 186.

For millennia, the stars have been used as a metaphor to represent the heavens and the souls of the dead. In the Pyramid Texts, sacred poems by the ancient Egyptians, this line struck me, written thousands of years ago:

“May the soul of the dead person fly into the fire beneath the holy ones.

They make a path for the soul…”

One scholar interprets the holy ones as the stars, and the fire as the light of dawn. The light of the stars at dawn make a path for the soul.

The Baha’i House of Worship is known by another name. In Arabic, a language which still holds traces of old Egyptian, it is called the Mashriqu’l-Adhkar, the Dawning Place of the Mention of God.

Here in Illinois, in the dome of the first Western Dawning Place to be built, the wheeling stars and braiding leaves are written, symbolizing the universe and our place as conscious souls within it.

Everyone’s experience of entering the sacred varies, of course. Always, these moments are beyond words. But I believe that language is simply an attempt to share what is beyond its scope. I’d love to hear one of your sacred moments. I’ll try to share one of mine:

You sit in a rose-velvet chair.

Time paces the rim, along with pilgrims

Who come and go and leave

Not their souls but a trembling

In the air. Rain clouds and sun-fall

Turn sky the same color as the chair

That holds you. Shadow of night

Passes over you, gentle bruise

Of all you’ve been through

Surfaces, for an instant,