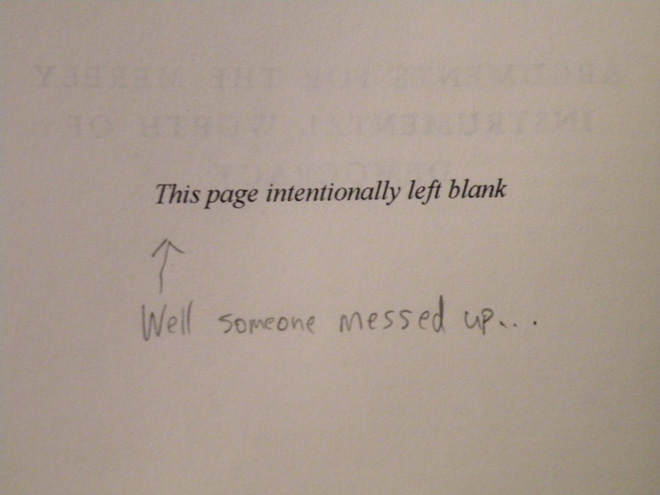 I love that wonderfully contradictory phrase which opens some books: “This page intentionally left blank.” Clearly, there are words on the page – so the “intention,” in one sense, failed. But in another sense, those words heighten the blankness, drawing our attention to it, causing (some of) us to question it, ponder it, give it a second glance.

I had this idea, a while back, of writing a poem playing with the same concept – pushing past what limits us, as well as the contradiction of words as the herald and foreground of silence. Fortunately, I had a little help from Wittgenstein, who made a few pithy remarks about the limits of language:

“Whereof one cannot speak, thereof one must be silent.”

I think poetry attempts to challenge both these statements, albeit with the methods of creative inspiration, which are endlessly freeing and surprising. Poetry is the language of the unsaid – which someone else has probably said, so I apologize for the appropriation. I think poetry has the ability to illuminate the fabric of existence – and to lift its frayed edge. Ever so slightly.

(She unfolds the page as if it holds an infant.

As if it contains life itself – sleeping and miraculous.

She unfolds the page, and wraps it around herself,

Letting its emptiness enfold her.)

A philosopher once said

You cannot use language to get outside language.

But that is the poet’s task:

To use language to get outside language.

So there must be a way

To craft a sharp blade, or blade a stout craft

From the tensile bars of alphabets

One thought on “This Poem Intentionally Left Blank”