A Conversation with Helen Butler 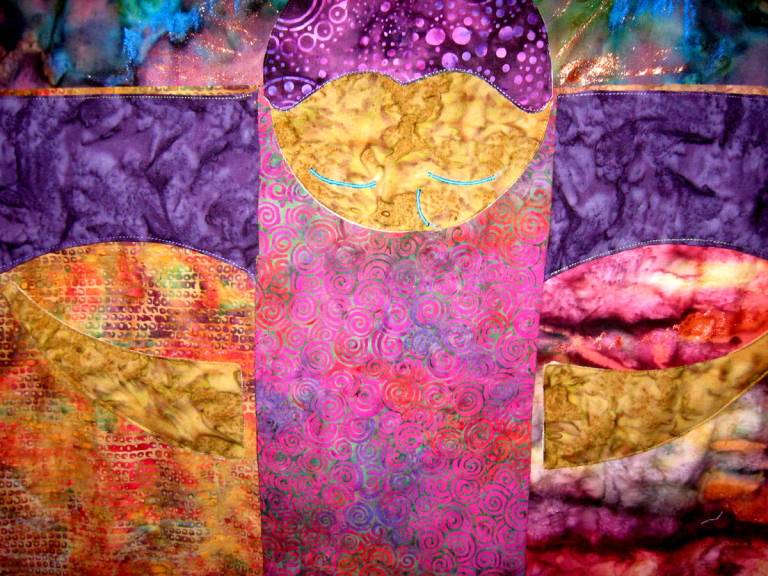 “I know that reality is true when it comes through my sense of justice.” – Helen Butler

Helen Butler weaves story. She also acts, quilts, and incants poetry. Her mind flashes with empathy for those near to her, and for total strangers a world away: victims of domestic abuse, children of drug-addicted parents, diamond miners in Africa. She channels these empathic flashes into words and textiles that somehow transcend suffering, yet make it impossible to turn away.  One of her recent creations, which celebrates the work and transformations of Nelson Mandela, is currently on tour with “Conscience of the Human Spirit: The Life of Nelson Mandela,” an exhibit co-sponsored by Michigan State University and the Women of Color Quilters Network.

I spoke with Helen to gain some insight into her evolution as a community-based artist, the role of story in her work, and the relationship between art, reality, and justice.

Andréana Lefton: How would you describe yourself artistically?

Helen Butler: I don’t think I started calling myself an artist until recent years. I did start out in theatre – I just sort of tripped into it. I ‘talked proper’. [This was in Florida]. So because I didn’t have an accent, I was cast in a theater piece…That’s the beginnings of my theater involvement. As a performer, I don’t know if I separated myself out as an artist. Usually, you’re working with someone else’s works. That’s probably why I never considered myself as an artist. You get to craft from the back-end, and then you are manipulated by a director. Artistically, you didn’t have an awful lot of say-so, except what you bring to the character. 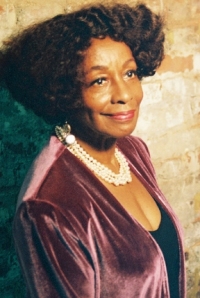 When I was leaving my undergraduate, I saw a woman by the name of Vinie Burrows. She did a one-woman performance of African American poetry and literature. And it was like (gasp) Oh my gosh! Seeing that, a piece of me said, I could do that. So when I was in graduate school, that’s exactly what I started doing. I started doing one-woman performances using African American poetry and or literature.

I still didn’t necessarily consider myself an artist, because again, what I was doing was playing around with somebody else’s words, trying to either enliven their words, or activate their words, or bring movement to their words. For the longest time I was a performer doing community-based theater, which is theater where the content actually reflects back to the constituents. The reason you do it isn’t ‘I need to be a star.’ It wasn’t about that. It was about taking a reality and acting as a mirror for that reality. That’s when I think I came more toward this artistic sensibility.

AE: What has been the journey of your voice out into the world?

HB: I grew up in the backwoods of Pennsylvania…It was quiet, you had a lot of time for reflection. So the practice of reflection was instilled in me and in my other siblings. Then our family moved to Florida, but I left home. I went to a historically black university, Hampton [in Virginia], where by the way, I got to do everything: I got to design costumes, I got to write, I got to perform, I got to build sets. I spent my life in that theater building. Then I went to grad school outside of Boston, so I have a master’s in theater arts. Then I went to New York.

In New York I joined a group that I shared artistic leanings with. This was the early ‘70s, and there was a whole artistic movement that was happening in New York as an aftermath of the Civil Rights movement. What you had were all these [community] theater companies demonstrating back to the community…acting as a mirror, to say, ‘You have value.’ There was so much energy. People were doing spoken word. Jesse Jackson was running for office. So [for example] we did a show at the Apollo and Jesse Jackson was part of the intermission piece. Then we continued with the rest of the show.

What I’m trying to point to is that my voice was not a single voice, it was in community. There was a rich community I was able to be a part of that spoke to my sensibilities…My voice was part of many voices.

AE: In your own life or in your art, what does ‘story’ mean for you?

HB: I remember being very young, and my family went to the drive-in movies in the backwoods of PA. We saw ‘Song of the South.’ I remember seeing that movie, and going ‘That’s not me.’ On some level I knew that story had influence. That’s kind of been my thing. I want to influence. And I know that if I try to go straight at someone, it will probably go into their rational, logical head. My desire is to go for the heart. Therein lies story.

Story began to emerge for me as a means for reflecting back to people: ‘Here’s what I’m observing about you.’ [Story] became my artistic canvas. I started creating my own shows from scratch, creating my own story…When I moved from performance into manipulating fabric, it’s that same thing. It is a matter of taking a story and reflecting it back to someone else: This is how it reflects through me back to you…

Stories are supposed to tell us how to move through the landscape. I’m not sure whether, in our commercialized and materialized world, we are using them for that purpose. But for the longest time, stories were supposed to help us with our survival: Here’s where you do go. Here’s where you don’t go. Here’s what happens if you ignore the guidelines…So in that way, story to me has this larger purpose. Whether I achieve it or not, I still think that story has this larger purpose.

AE: And in addition to imbuing the next generations with this ancient wisdom, story is also giving some order to the confusion and chaos that is so much of human experience too.

I can see that with your quilting. Weaving or quilting is in itself a metaphor for the ultimate nature of reality. Some physicists are saying that the universe is composed of these little threads of rustling energy. Our senses weave this energy together to make sense of reality.  Again, we’re talking about art or the artist as a mirror of Nature and the ultimate reality of things.

When you are presenting your quilts, do they always come with a performance aspect? Do you hesitate to display your quilts in a gallery when you’re not there to reflect that story?

HB: No, I’m not hesitant, but it really is different. The times I have displayed I’ve attempted to

capture at least a portion of what [the story of the quilt] might be. Even if it’s in three sentences. There’s this one piece I have called ‘Diamonds’. [Its story is]: ‘ In 2007, The New York Times had this article. 250,000 children from sub-Saharan Africa subsist on a bowl of rice a day as they mine for diamonds.’ Even in those [few] sentences, I’m able to say ‘Here’s what the story is. Here is the appalling [fact]. And here’s how it makes me feel, or what I think about it.’ So on some level or another I’ve been able to capture some portion of the narrative and share that, rather than have the piece attempt to stand on its own. 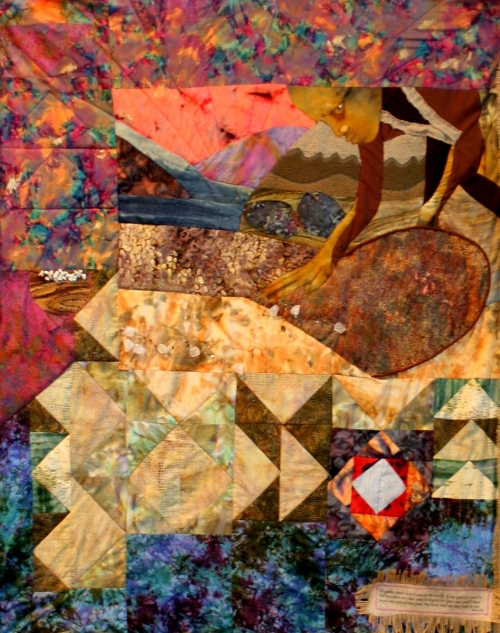 AE: I was wondering  if you could tell me the story of your Mandela quilt.

HB: Over the winter months, last December into January, I was doing a workshop [at Louhelen Retreat and Conference Center] and one of the participants came up to me. I told her my real love is working with fabrics. She said, ‘Really? There’s this woman…” And she told me about…the ‘Women of Color Quilters Network‘. So as soon as I got home I emailed [the founder]…She said ‘I’m curating a show for South Africa, would you like to enter something?” And I thought, uh-Huh, ok. Alrighty-then…

I love to do research as I’m working on a piece, so I immersed myself in South African culture, the various tribes, the music…In the meantime I got a call from a dear friend in Atlanta, and I happened to mention to her that I’m making this quilt. And she said, ‘You’ve got to make it on ‘the pupil on the eye’!”

In the Baha’i Faith, people of African descent have been compared to the pupil of the eye [as the channel and magnifier of the world’s light]. So I got my subject matter!

A year earlier I had gone around my work environment and taken pictures of African Americans – just their eyes. I didn’t know what I was going to do with these photos [until now]. I decided I was going to put an actual photo of Mandela in the pupil of an [African American eye] …This was one of the most collaborative pieces that I worked on.

AE: How does your faith [as a Baha’i] influence your art?

A couple of ways. One is that, when I was in graduate school, I read a book of poems called ‘Words in the Mourning Time’ by Robert Hayden who was an African American Baha’i poet. [I wasn’t a Baha’i at the time] but I knew my heart was moved…

When we read the [Baha’i] Writings about justice, each of us has this capacity to know reality. So I know that the reality I create – whether it’s through fabric or movement or writing – is a true reality because it is coming through my sense of justice.

AE: I love that. ‘I know that reality is true when it comes through my sense of justice.’ Have you articulated that before?

HB: No! That’s the first time I’ve said that! …[Our sense of justice is] like a muscle or a  capacity we still need to work on… I need to work on myself so that a year from now, my sense of what is just, true, and fair will continue to grow as I work on how my soul connects with the world.

(You can read Helen’s own poetic descriptions of her work here: “Response: Art Quilts of the Heart’s Promptings”)