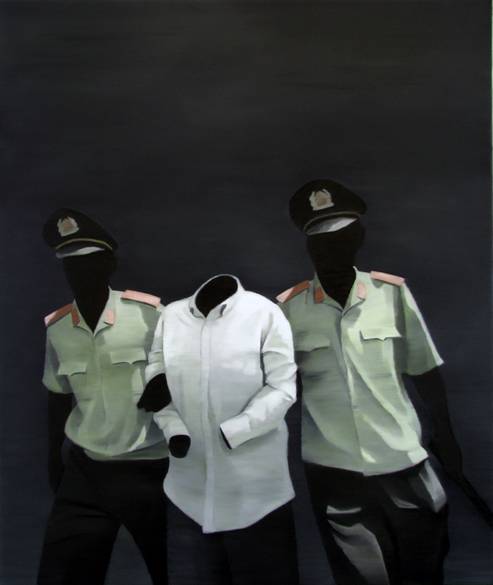 “Brown’s body was left in the middle of the street for more than four hours. No aid was administered to him. No ambulance was called.”

Between me and this black body hang hundreds of miles of thick summer country. There are highways and rusty farmland, sweet corn swelling to ripeness in fields, convenience stores and cheap motels, and rivers where men fish and children poke at dragonflies in the shallows.

Between this black body and me hang airwaves glittering with voices old and new, judicious and accusatory, informed and inflamed. The airwaves are full of images too, of looters and tear gas, police advancing like Roman soldiers, shields interlocked.

Others shout, cry, chant. There is violence, and the green roots of healing.

Politicians descend. And pundits. We have a conversation on race and class in America, then another, and another. We talk and there is hope in this. Hope that the airwaves and hearts will be cleansed by the rivers of human voices, outraged and loving.

Conversations also lead to despair, or at least distrust. We talk, and say to ourselves, Something good is happening – forgiveness, change. We talk, and say to ourselves, Next time it will be different – there will be no next time. And then, when next time rolls around, and another boy is shot, and all sides claim innocence, and there are no facts except for the one truth of a black body lying in the streets of Ferguson – what do we do then?

We talk, and take to the streets, and hug and pummel each other. We march and expound and cross our hearts and swear on the Bible or Qur’an: Never again.

But something is not happening. Some conversations are not being had. Race and politics and class war do not define the boundaries of the human soul. Until we probe the connections between rejection and identity, perception and self-belief, we will continue to ask why kids are bullied and commit suicide, why hate crimes exist, and why Michael Brown was shot.

Between me and this black body hangs the wheel of history. Of the same story being told with different names and different faces, in cities and neighborhoods the world over. And until it becomes our story, and not theirs – our body and not their collateral damage – the cycles of talk and reconciliation and forgetfulness and recurrence will not cease.

There will always be a black body in the streets of Ferguson.